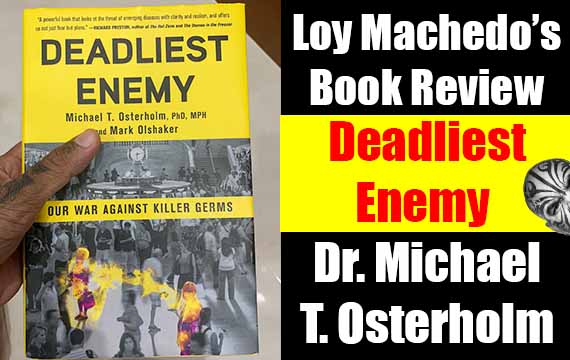 In a day and age of fake news, media publications which are influencing you to believe in whatever agenda they have & misleading information from the google.com era, Deadliest Enemy is a welcome read.

Dr Michael Osterholm, a world-renowned epidemiologist, sheds light into the intricacies of vaccines development, government regulations, policy introductions, the complexities of rolling out life-saving medicines & the unshakable dominance of political clout even in the world of medicine – this book if nothing else will shock you into what you thought you knew and what you literally do not know. In fact, you will be reminded as to the fact that today we live in a day and age where still there is massive budgets allocation for the creation of weapons rather than allocating even a fraction of the same money for life-saving medicine.

The book is divided into 21 chapters with each and every one of them giving insights into some of the world’s most prolific epidemics and the science behind its contagious spread. And along with each chapter, you will also get to understand why the disease did spread so rapidly. (Spoiler alert – it wasn’t the disease only rather the government response & lack of interest in taking the matter seriously)

In fact, the part of the book that surprised me the most was the undercurrent that implicitly stated as to why most first world countries wouldn’t be bothered with most of the dangerous diseases of the world as it threatened third world countries i.e. the poor people in these nations and not them – the rich, materialistic, western society. So now, since it didn’t impact them in any way – why bother? After all, what commercial & political benefit would first world countries gain by helping poorer nations? And secondly how long can they take on this thankless burden when everything today is measured in terms of ROI?

The book also gives you a detailed account of the rise & spread of AIDS, Ebola, Dengue fever, TB, Malaria, SARS, MERS, influenza, Zika, the origins of epidemiology, new diseases, the evolution of pathogens, the creation of vaccines, the rise of vaccine-resistant viruses and the impact of socio-political decisions on the quick-action (or lack there of) of these diseases. The book is pretty comprehensive on the science of fast-spreading diseases at the same time offering you educated preventive measures to ensure you are kept safe.

I think what I loved the most was that this book was easy to read, easy to understand and easy to put into practice. This is without a doubt the most educated manuscript I’ve read on the subject of epidemiology & fast-spreading new diseases. And if a school dropout like myself can get a grasp of what the author is trying to communicate, I can tell you without a doubt – it is a must read.

In a nutshell, getting away from all the noise, the conspiracy theories and the nonsense that is going on around us today, I would highly recommend this book to both the educated & the uneducated mind.

Trust me.
Read it.
It will bring everything into perspective.