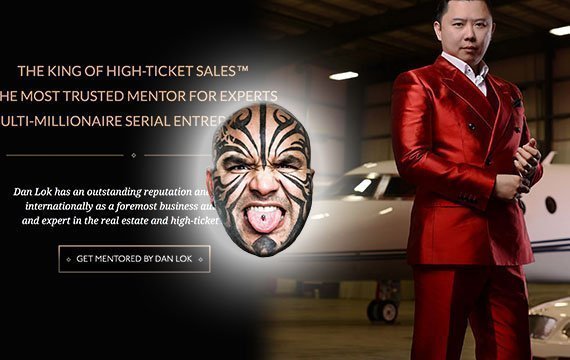 Dan Lok
Have you heard that name?
Or maybe “Boss In The Bentley”
Or maybe “The Man, The Myth, The Legend”
Or maybe “Best Selling Author” for the book “FU Money”?
Seriously – No?
In fact, shouldn’t it surprise you that he nearly charges USD 163 per minute of his time to give you financial advice on business success?
Well, if you haven’t heard of him and need to know more about Dan Lok, here is a detailed analysis of this Internet Marketer. 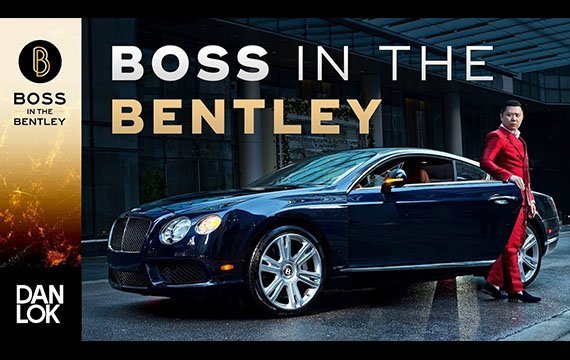 Dan Lok Boss In The Bentley

Who is Dan Lok
Dan Lok is an Internet Marketer who positions himself as a “Serial Entrepreneur”
On Amazon he has around 10 books.
He calls himself a best selling author with 87 copies sold 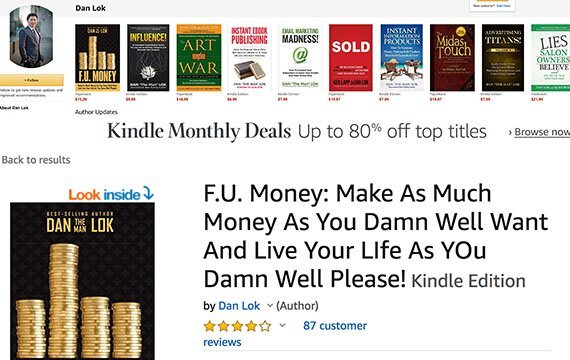 On Youtube Dan Lok has around 802,515 subscribers
Dan Lok has spoken at TED
The unstoppable force  which has around 338k views & 450k views 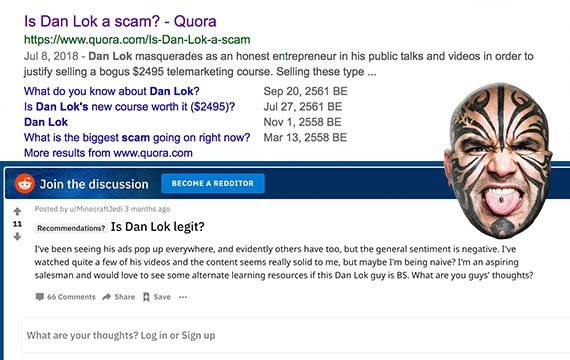 In fact, when I did a google search, there wasn’t anything about him that anyone other than he himself had stated.
I honestly had no idea what he did until one fine day I bumped into his profile on an Internet Marketing Site….
I was surprised to find him on ClickFunnels realized he is an Affiliate Marketer, Internet Marketer & person who sells online courses. 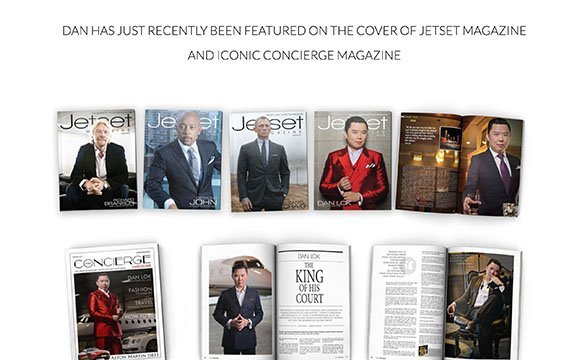 He has the moniker
The Man. The Myth. The Legend
Boss in the Bentley
In fact, he is also humorously called “Gangnam Style James Bond” for his flashy Bright Red Suits

Oh here is something interesting…
On his website – he has stated he was featured on ABC, NBC, Fox News, MSBC
But if you google or check on youtube – there is no such record of this. 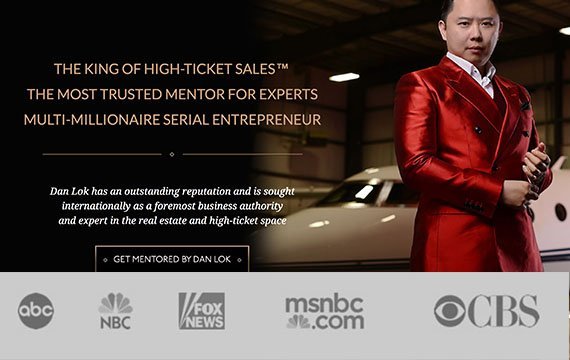 Given that he had photographed himself next to Bentleys & Private Jets,
I decided to buy his so called best selling book and find out whatever I could about him and his nuggets of wisdom.
In comes “The FU Money” 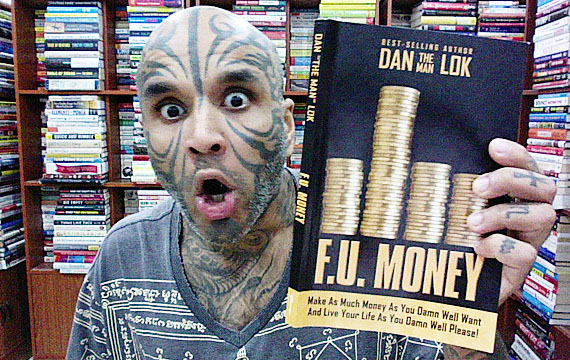 Dan Lok’s FU Money – The analysis of the book

The book is divided into 4 parts:

Here is my detailed analysis of his book

On the summary page he asks 3 questions:

Chapter 2: How to live like a movie start even if you are not famous
This chapter has only 2 pages and I seriously couldn’t understand what he was trying to say
Fake it till you make it?

On the summary page he asks

He also shares his FU Money Assignment List where he lists his toys & expenses where his annual expenses are around $639,872 a year

In a side bar finally, Dan Lok defines FU Money
Any amount of money allowing the infinite perpetuation of wealth necessary to maintain a desired lifestyle without needing employment or assistance from anyone

Myth Number 1: Money cannot buy you happiness
– Here he speaks about the time his father suffered a stroke

And following that, you are supposed to answer the following question

In the assignment, you are supposed to complete the phrase

Myth Number 3: You can afford to wait

In the assignment section, you are supposed to write down the answers to the following questions

Myth Number 4: You have to be lucky

There is no written assignment here.

Myth Number 5: You have to be a cheapstake

In the assignment section – you are supposed to complete the sentences

Myth Number 6: You have to get rich slow

According to Dan Lok, How you can become rich fast is:

Myth Number 7: You have to work hard to make money

Dan Lok recommends:
Doing things once and getting paid again and again

In the assignment section, he asks to brainstorm 20 ways you can generate more money without working hard.

Myth Number 8: You have to be perfectly ready

He also states that he has a MBA – Massive Bank Account

He speaks about the book – The Secret where it just brain washed people into believing if they sat down and imagined – they would make money or lose weight or achieve their dreams.

He speaks on the importance of taking action.

And in the assignment, he asks to complete the following:

Chapter 11: The FU Money is not for the Touchy Feely

According to Dan Lok, most people are morons

He states the people in our lives – the teachers, professors, the friends, parents, relatives and colleagues are all broke

In the assignment section, you have to answer the following questions

Chapter 12: If your life stinks – its your own fault

Chapter 15: The Most Important thing you can do today

Chapter 16: You can make money or excuses not both

Chapter 17: The Power of setting up DIG – Daily Income Goals

Whatever is the amount you want to make in a year – divide into a daily amount and figure out how you can achieve that amount.

In the assignment section, he asks the following questions:

Assignment – the questions asked were

Assignment is to make a list of activities we do on a daily basis,

And that is believes is the Internet Business

Assignment he gives is to answer the following questions:

Chapter 25: How I went from Rags to Riches on the Internet 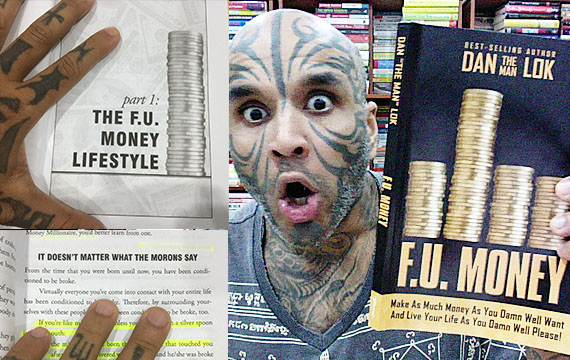 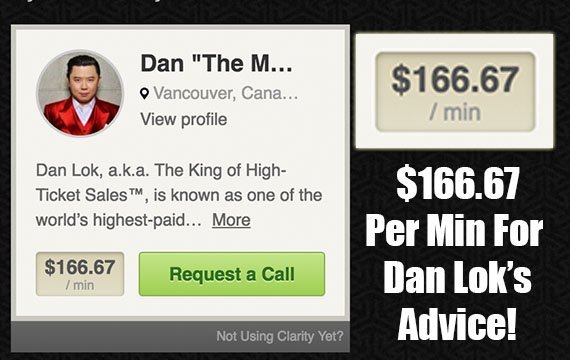 A few days ago, I had a facebook follower of mine who booked a session with Dan Lok for 15 minutes @ $166 per minute to have a life changing session on “How to 10X his revenues”. The reason I bring this up is the idiot literally withdrew from his credit card (he has 5 fully maxed out) and he booked the session. And then following that – he happily bragged about it on Social Media to let the world know he was “serious” about not leaving any stone unturned.

Now personally, I have no idea what advice he would give him that could “10X” his life in 15 minutes, but I can assure you, the $2,500 USD he spent…. will be the most memorable and expensive call-per-minute he has ever undertaken.

Dan Lok is an Internet Marketer whose rise to fame is his rise to fame. He appeals to those people who are attracted to the “Shiny Object Syndrome” and want to earn a 7-figure income or 8-figure income bracket with generic, mindless & pointless pieces of advice on “How to get rich”. In fact the only person whom I know and can guarantee gets rich is Dan Lok himself by charging these mindless sheep USD 166 per hour for his time & advice. Personally, I do not think Dan Lok has anything worthwhile to offer other than promote and market himself as the Savior and Guide for the desperate fools who assume they can become rich & successful by listening to crappy, recycled & generic advice.

So if you have money to blow and waste and the curiosity to listen to generic nonsense – Dan Lok aka The Boss in the Bentley aka The Man, The Myth, The Legend is for you.
These are the Tai Lopez, Grant Cardone & Dan Pena Internet Marketers of our generation who show you their toys and make you fools for their quick-get-rich lifestyle. Mind you – they are rich ONLY and ONLY because you pay them your hard earned money. That’s how they are rich. And their secret to success & richness is that you purchased their video, online course or online product or service and that is how they become rich.

Personally, I wouldn’t spend more money than the cost of downloading his ‘best selling’ book, reading it and throwing it away (aka delete) from your hard-disk.

Overall Rating for Dan Lok’s FU Money
Another FU from my side.