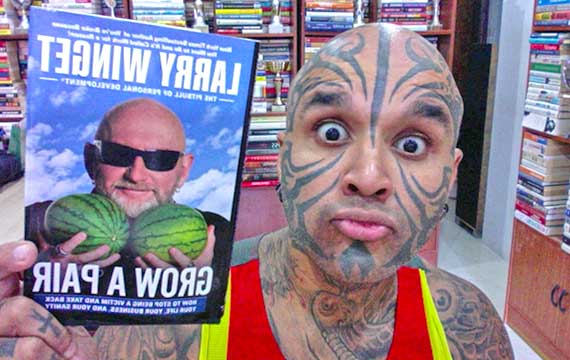 Who is Larry Winget?

I have personally read all his books and watched most of his videos, DVD’s & youtube videos. Larry Winget is someone I deeply respect and consider incredibly authentic, powerful and worthwhile subscribing to.

The book in a nutshell follows Larry Winget’s classic formula of telling the readers that they need to take charge of their lives, stop being a victim and take personal responsibility.

Let me tell you without a doubt – I love Larry Winget’s approach. I am a big fan of his work and a constant admirer of his personality. I think he is one of those rare individuals whose style and substance is truly worth a read, a watch and an experience.

Even today – if you watch his video or read his book or listen to him on youtube – I would highly recommend you to do so. However, this book is an utter disappointment.

At its worst – it sounded more like a rant and at its best, it was a book that could have been reduced to one-tenth its size. I ended up skipping the pages and reading the whole book within 2 hours. And if there is anything worthwhile I did pick up – well – I can put it in one line – take personal responsibility.

The rest however – standing up for your bullies in your personal and professional life – well I am more of a person who believes in working smart and with a strategy than going on a head-on collision – because I know what the powers of those with powerful political connections can do – (you can watch my video titled Loy Machedo 2011 Suicide video).

What Larry Winget seems to forget is that – until now he is lucky that he didn’t get into a fight with some dangerous person or some underworld character. If he did – I doubt he would write whatever brave stuff he has written. In the real world – most of the advice he has given sounds good – but in practicality cannot be implemented. Because in some places – when someone puts a gun to your loved one’s head – your guts & your balls automatically reach the size they should have been in the first place.

And if you want to know where this approach can sometimes take you – I suggest you visit a prison or jail or a hospital where someone has ended up paying a price – a really massive price for being brave, bold and ballsy.

Is it worth it losing an arm, a leg, being blind or being jailed for life for being ‘a man’ for few minutes?

I leave that decision and choice to you.

: Grow a Pair, Larry Winget, The Pitbull of Personal Development